Situation of Japan birds observed from the last two studies

Based on the studies occurred in 1974-1978 and 1997-2002, change in birds in Japan is observed. Decreasing birds are listed on the Red List and are being conserved. In this section, distinctive distribution change is introduced.

Looking at the statistics of each bird species, the distribution change is different for each species in different regions. Hokkaido and Tohoku regions are needed to be particularly paid attention because their change is different from others regions; metropolitan and the Kansai areas also need to be watched closely due to decreasing birds.
For example, if we observe nationally, birds that shows decrease in distribution, such as eastern crowned leaf warbler (Phylloscopus coronatus), brown dipper (Cinclus pallasii), grey-faced buzzard (Butastur indicus) (does not exist in Hokkaido), and various other birds, have increased their distribution in Hokkaido and Tohoku regions. In addition, species such as Asian stubtail (Urosphena squameiceps) and winter wren (Troglodytes troglodytes) does not show much change in other regions, but it shows that the distribution has expanded in Hokkaido and Tohoku regions.
Reason for regional differences mentioned above is not well understood. Because it seems that the distribution has been expanding from south, it is possible that global warming plays a role. It is indeed that air temperature is an important factor for insect distribution, bird distribution may also be correlated to the movement of their food - insects, which can also be altered due to global warming. However, will such short period of time affect the bird distribution? The answer may be revealed when this study is combined with the rest of studies.
Kyushu region is also slightly different compared to other regions in terms of the change. Oriental turtle dove (Streptopelia orientalis), oriental greenfinch (Chloris sinica), white-cheeked starling (Spodiopsar cineraceus), carrion crow (Corvus corone), and others have spread that may have decreased distribution range or any change in other regions. 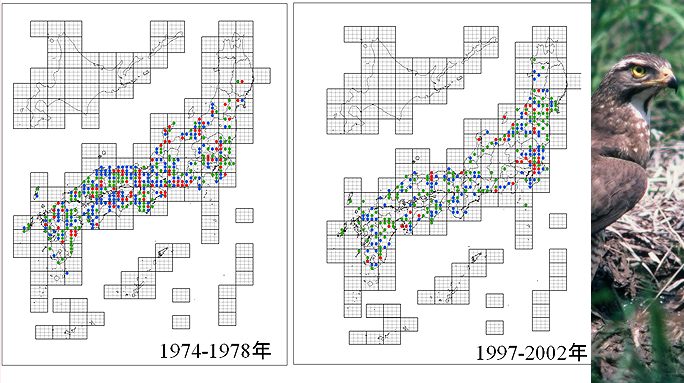 Recently, it hasreceived attention that there is a decline of summer birds. Forest birds such as ruddy kingsfisher (Halcyon coromanda) and Japanese paradise flycatcher (Terpsiphone atrocaudata) have particularly showed rapid decline. Certainly, these birds are declining, but it is revealed that early successional forest/glassland/wetland birds have been remarkably declining. Early successional forest birds include grey nightjar (Caprimulgus jotaka) and shrikes, glassland birds include Japanese quail (Coturnix japonica), yellow-breasted bunting (Emberiza aureola), and Eurasian skylark (Alauda arvensis), and wetland birds include ruddy-breasted crake (Porzana fusca), greater painted snipe (Rostratula benghalensis), and yellow bittern (Ixobrychus sinensis). Even though ruddy-breasted crake is rapidly declining especially in the Kanto region, detailed distribution study on the crake in the Tochigi prefecture showed the same result. 15 areas where sightings of the crake were confirmed between 1960 and 1980 were studied in 1995 and 1996, but only three places had crake sightings (Hirano 2004).
Although there are many unknown parts for why there is a decline, it is thought that the main reason for the decline of Eurasian skylark in Tokyo is due to decline of agricultural land and land conversion from planting grains to vegetables (Ueda et al. 2005). Depending on the region, reducing acreage can cause paddy field to become wheat field, which causes the skylark to increase. This shows that reason for declining birds is variable at different regions. For yellow-breasted bunting, it is hypothesized that the quality of grassland is changed due to aridification, mass trapping in China which is a migration stopover, and other possibilities (Tamada 2009), but it is still not well understood.
For birds that are highly dependent on paddy fields such as ruddy-breasted crake and greater painted snipe, it is thought that increased cultivated land consolidation has a great impact on paddy field aridification. When aridified, it is known that frogs, carps, loaches, and other small aquatic animals reduce numbers. U-shaped ditch installation may also have an impact on small animals and fledglings which can accidentally fall. 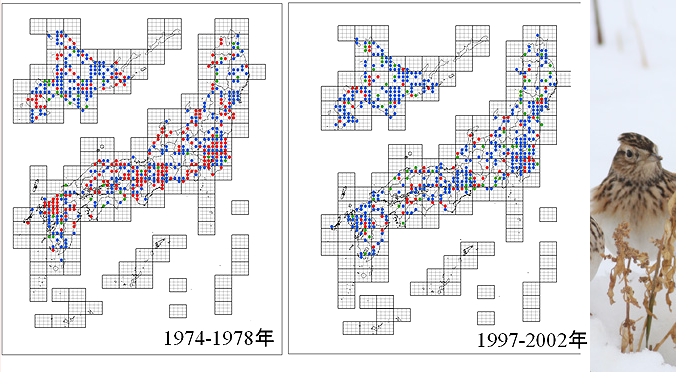 Birds that live in riverbed and gravel bed areas such as plovers, common sandpipers (Actitis hypoleucos), and little terns (Sterna albifrons) are decreasing. Reduced sandbars due to river improvement, decreased flood due to flood control, increased vegetation, and various other environmental changes are observed. Because of these, riverbed/gravel bed birds are declining. Not only are birds declining, but riverbed plants (i.e. Aster kantoensis Kitam.) are also on the verge to become extinct due to these changes.
Due to the declining natural habitat, these birds are using reclaimed lands as substitute. Reclaimed lands have increased during high economic growth period in the 1970’s; however, they are currently decreasing due to the land increasingly becoming industrial land and flourishing vegetation which reduce gravel bed.
Good quality breeding land is also decreasing because of high number of people using areas for barbequing and camping due to recreational popularity in these areas. It has been reported that long-billed plover (Charadrius placidus) residing in dry riverbeds in the Saitama prefecture (Uchida 1992) and Kentish plover (Charadrius alexandrinus) living along the coast in the Mie prefecture (Hirai et al. 2000) have been stepped on and crushed by people due to ranger projects, failed to breed due to guarding from passersby, and extremely reduced breeding success. 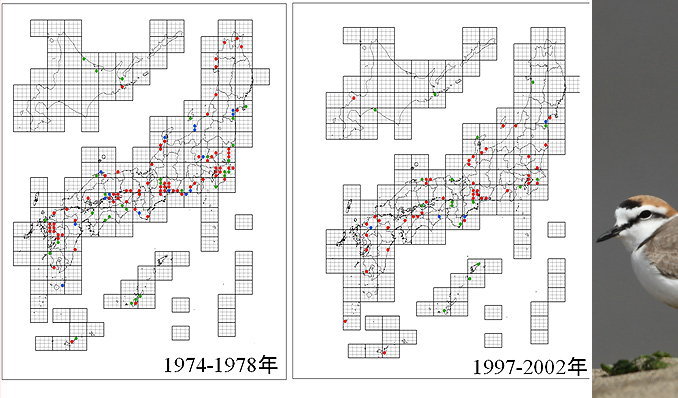 It is observed that the distribution for great cormorant (Phalacrocorax carbo), great egret (Ardea alba), grey heron (Ardea cinerea), and other large fish-eating birds have been increasing and the distribution for little grebe (Tachybaptus ruficollis), little egret (Egretta garzetta), striated heron (Butorides striatus), and other small fish-eating birds have been decreasing.
For large fish eaters, worsening water quality, dying off due to fertilizers, and other factors have decreased their distribution temporarily, but fortunately, improvement of these have largely helped birds to recover. These chemicals strongly affect animals in higher trophic level in the food chain. Within the cycle where the plankton is eaten by small arthropods, which is eaten by small fish, and then eaten by larger fish, hazardous material is highly concentrated and the impact gets significantly larger. The impact is larger when large fish eating birds eat large fish comparing to smaller birds eating smaller fish.
In contrast, small fish eaters may be decreasing because of the presence of largemouth bass (Micropterus salmoides) (black bass). Because largemouth bass preys on small fish, shrimps, and other small animals, small fish decreases in areas where there is a high number of largemouth bass. In that case, small fish eating birds may decrease due to decreasing food (Sahara 2005; Shimada et al. 2005). 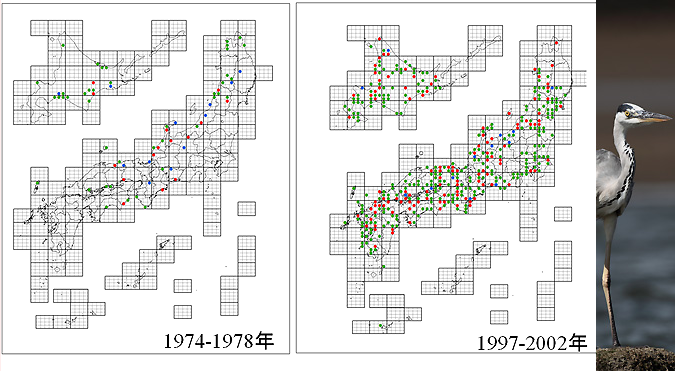 Even though it is not shown in the distribution map, there are also birds that showed both increase and decrease in each study course. For example, small cavity nesters such as Japanese tit (Parus minor), varied tit (Poecile varius), and narcissus flycatcher (Ficedula narcissina) have been increasing. During 1970’s, it is believed that in urban neighborhood, wooded areas such as thin seedlings in parks and trees along the road have been grown, and eventually, tree hollows are formed, which in turn, formed an environment where birds can live. For community-based forest areas, firewood is often not used for energy, thicket is not managed closely like in the past, and dead trees and branches have increased, which are all possibilities to produce nesting ground for these birds. However, because Japan is a country with many mountainous regions, looking at urban areas and forested areas wholly is small scale. Therefore, it is not known if there are other rational reasons than those mentioned above.

Birds living around us such as tree sparrow (Passer montanus), white-cheeked starling, barn swallows (Hirundo rustica), and oriental turtle dove (Streptopelia orientalis) are decreasing. Sparrows have been decreasing from sites other than studies prepared by the MoE (Mikami 2009) and it is been reported that starlings have been decreasing in the Tochigi prefecture (Higuchi 2005; Hirano 2005). When taking a look at the Tama region in Tokyo, it seems that starlings have been increasing, but this is only local observation so there may be a gap in our understanding when considering nationwide.
These birds will decrease due to extreme urbanization. There will also be an impact on familiar birds in meso-mountainous regions where there is human population decline. Other than these exact opposite reasons and human activity areas, there are other various changes in habitats due to human disturbances. For example, for sparrows and starlings, it is possible that there are not enough spots for building nests as residential buildings increasingly become dense and tall. For sparrows, because building’s exterior walls have increasingly become slippery, walls that is able to hang nests may be decreasing.

After 20 years since the first study, there may be further change in the world of birds. Signs that have not been noticed in previously studied areas may be observed after collecting information from across the nation. With everyone’s cooperation, let’s watch and study how the situation is changing!

Biodiversity Center of Japan (2004) The National Survey on the Natural Environment, report of teh distributional survey of Japanese birds.